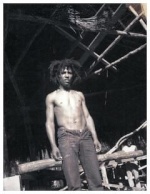 First, give thanks to S.O.T (Sean, aka SonOfThunder), and yes, Dubwise, for their March 2008 works on
Basing Street Rehearsals. Their level of work is beyond what I have to offer. As for the SBD or 3rd gen source
material they used, thanks for making it available. Certainly both versions of these rehearsals are now easily found
on the web, in flac, or unfortuneately, in MP3, via direct download ! As to wether the date is 5-24-77 or 5-31-77,
more people seem to list 5-31. Pre-digital age, though, who are the players that made this audio available ? In the
vain of more basic, and in a sense- older versions of audio for Basing Street, I have the following partial version to
offer.
This is not a definitive version of Basing Street, but a good, partial one. It comes from a compilation tape
which I have some reason to believe may be a 2nd generation copy of a Roger Steffens compilation; but don't
quote me on it as I don't know for sure. A friend of mine in Santa Monica had many such gems which were from
Roger. In any case, what interests me is that I have had this since about 1990, before full Basing Street versions
where readily available. And, the song order is somewhat different, likely by choice of the maker (not Me). But the
audio I feel warrants a listen as it is warm, full, and natural in an analogue way- which I realy like. Also, the audio speed
is, or seems to be perhaps a little more layed back than what I have heard in other versions; something I did not effect at all.
Further, I did not NR this one to reduce cassette hiss-though a small dose might not hamper the audio overly much. Also,
pardon my lack of Flac here, but it is in Wav as is most of my stuff until I get that (flac) process down. So, this is all I
knew of Basing Street until recently. Furthermore, I didn't even know where it took place. In fact, I labelled (in 1990)
the tape "Positive Vibration Rehearsals" as that song seemed to carry the strongest vibe of the set; though Lively Up Yourself
is longer. For accuracy, I have listed the full tape contents, though only 6 "Basing Street" tracks are included with the torrent
here as there is nothing new in the rest- only listed to give context to the source for those that may doubt its' authenticity.
Maybe someone else has this same tape as well. If so, let me know what you know of its' making.

So, hope this was of some historical/auditorial value as a partial piece of Basing Street. It was "all I ever
had" for a long time, though perhaps better full versions are available. Thanks to the origional maker of the
tape, though I would have liked an entire rehearsal rather than the wide range of stuff that he/she provided.
Must have been intended that way as a broad mix is what I believe.